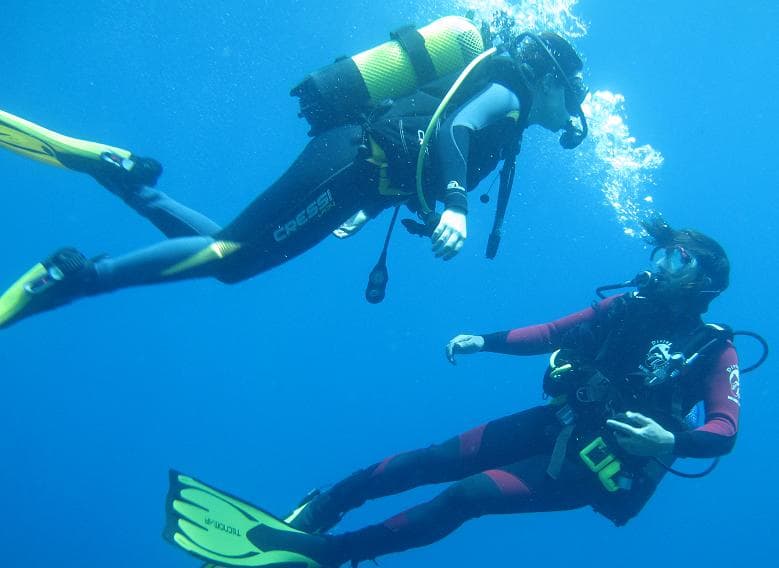 The dives available in Benidorm are located in two different locations: Benidorm Island and Serra Gelada.

The meeting point and boarding is in the same Club Náutico de Benidorm.
The dives are always carried out with the maximum security measures, a 5L bottle at 5 meters submerged at the dive point and ALWAYS A PROFESSIONAL PATTERN on the boat at all times.
It is not necessary that you come to dive as a couple, if you come alone, we will assign you a dive partner of your experience or we will put you with one of the Monitors of Revolution Dive.
We have equipment of very good quality and in perfect condition that we put at your disposal, in case you have not been able or you have not wanted to bring your own.

In this area we can find diving spots for all tastes and levels; There are easy dives for newcomers in this wonderful world, as the points of Embarcadero and Punta Garbí, the most experienced, will enjoy points like the Llosa, which reaches 33 meters deep; You can also find places for all levels, such as the points of Cara Norte and Los Arcos. 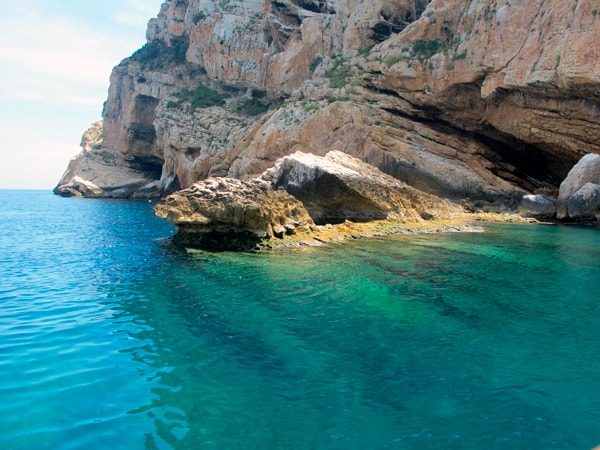 Immersion from 9 to 25 meters depth that already requires a little more level, because the rocky structure gives rise to hollows and the odd tunnel, as the most famous arc through which we must pass. The games of lights between the rocks are spectacular, a pleasure for the eyes.
Apart from the stunning landscape, it also offers an explosion of life with large schools of fish, barracudas, eagles …

A characteristic of the waters of the island of Benidorm is its usual transparency, an aspect that divers always appreciate and more when combined with beautiful funds charged with life, as in this dive. On the NE side of the island we anchor at a buoy about -6m and from there we descend comfortably to a maximum of -22m. We find a rocky substrate with pieces of medium size that are reduced as we move away from the wall and the sand rises, and which enlarge to form huge stones as we approach the island. The suggested route consists of advancing from the buoy, parallel to the island and recognizing the cyclopean rocks and life that harbor golden bream, banks of bream and octopus, being frequent encounter with schools of spits. When we drift towards SW, change the bottom of stones to give rise to another of cliffs, at which point we ascend to about -14m and approach the wall, the large rocks reappearing and, among these, elongated caves superimposed as a viewpoints, at -9m, which form great backlights. Following the wall that we will leave to our left we will be able to return to the anchoring, progressively eliminating the nitrogen.

A fantastic blue chasm at a depth of 33 meters. This location is located behind the island of Benidorm (far from the coast and in deep water). A large variety of large fish, octopus and crustaceans can be seen in La Llosa. Strong occasional currents and heavy feeding should be some of the reasons why sea life seems much bigger here than those found near the coast. Many consider this place the most beautiful, between Calpe and Benidorm

It is located approximately 300 m south of the island. Its highest part is 6 m from the surface. The environmental conditions of luminosity and hydrodynamism make up a habitat of singular importance. It is frequented by predatory species such as Serviola, Espetón and Denton. It also constitutes an important refuge for more sedentary species such as moray eels, octopus, different species of bream, etc. The plant component is represented by various species of infralitoral photophilic algae. 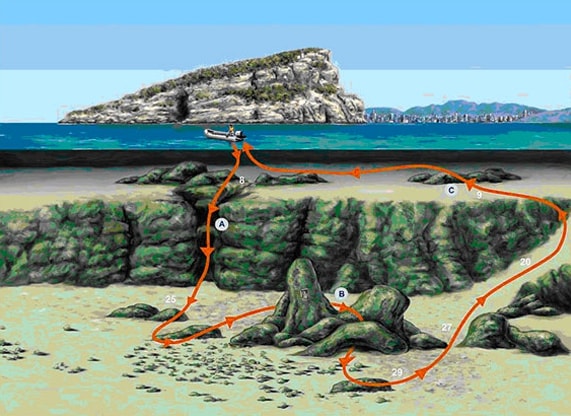 At the base of the vertical walls of the island (especially face N and E) and on the face E of the Llosa is a bottom composed of numerous rocky blocks, many of them fruit of landslides. At first glance, we only discover a great quantity and diversity of fish, but making a more detailed observation of the bottom will allow us to distinguish a multitude of invertebrate species hidden among the nooks and crannies of the substrate, the main characterizing of the landscape. On the lower face of the blocks and loose rocks lives an animal community (infralipidicola community) constituted by bryozoans, ascidians, sponges, polychaetes, etc.

The dimensions of the Llosa and the numerous reasons of interest allow several underwater incursions, existing up to 3 anchorage buoys arranged for the mooring of boats. On this occasion we approach the one located to the north and that descends to the platform, about -8m. If we continue heading in an absorbent fall appears that, combined with the great visibility that we usually find, will make us plan to a bottom of -29m. Here begins a rosary of large rocks that provoke a multitude of backlights and host an abundant life of considerable size, such as gilthead breams, dentexes, ordered schools of corvina and bream and, more crouched in innumerable hollows, large octopuses and showy moray eels.

The route, following the South profile of the Llosa that will remain on the right, consists of visiting these colossal rocks, some of which is crossed by a tunnel at its base, such as the cave of the Virgin, for, when the air or the accumulation of nitrogen advise, approach the wall of the Llosa where we will find some huge tears that we can take as a reference to go up while the motives of interest continue, this time in the form of numerous and colorful nudibranchs, until reaching the starting point again .

If it is our first time diving or we just want to do a simple and at the same time beautiful diving, we will dive in Punta Garbí, next to the slope of the island of Benidorm. Sand bottoms where we can find ourselves, hidden under the sand, rat fish in winters and rares in summer. Crowd of moray eels and congers between the rocks of the island’s slope and, again, the sea eagles flying over the blue or semi-buried resting in the background.

In this case we look for the South face and we go towards Punta Garbí. There we can tie the boat in a buoy that takes us to a bottom of -8mts. We are almost on top of a rocky platform that from -4m descends at that point to -20m, offering an attractive vertical fall on a rock wall full of holes and crevices where soon appear some brunette and numerous octopuses. The immersion will consist of following that wall leaving it to our right, heading W and exploring the thousand and one nooks and crannies occupied by varied fauna, from castanets to thrushes. The wall has numerous longitudinal cracks and in the lower part, balconies with the upholstered ceiling of the colorful yellow encrusting anemone where we may find a mere grouper. There will be frequent encounters with nudibranchs, clavelins and sponges and already in the sandy bottom that reaches -28m, some ray. As we drift towards the pier, a more continuous stretch of sand appears that forces us to reduce the depth by looking for the rocky platform that finally takes us to a colorful arch. This may be the moment of the return, this time over the platform until we reach the starting point where we can safely make the safety stop.

With a depth ranging from 1 to 20 meters, it allows a very nice dive and suitable for all levels. We can see castanets, obladas, sarpas, scorpion fish, octopus, nudibranchs, moray eels … and vegetation on the rocky surface. A very attractive point is the Arch formed by the rocky soil. The nocturnal ones are especially beautiful. Occurring the sun appear some predators like congers and small life.

Within this natural park, we have, mainly 3 diving points:

Located between Altea and Benidorm, it is an underwater cave known as the Elephant Cave, due to the formation of rock over the entrance. The entrance of the cave is 12 meters deep in crystal clear water, once you reach the end of the cave you can see good examples of stalactites inside the chamber. The cave itself is 25 meters long.

It is a shallow dive with a maximum of -14 meters and an average of about -8 meters, but which takes place in a circuit especially exciting because of the beautiful caves and chimneys that like authentic blue windows will amaze us continuously.

As soon as we descend we look for the wall and there the entrance to -8mts. to the Enanito cave, with a considerable cover but little inside. After accessing it we can ascend to a surface where there is an air bubble. We descend again only a couple of meters to see an illuminated tunnel that indicates the exit through a window just above the entrance. Once in the open sea, the route consists of leaving the wall to the left, which is profusely upholstered with yellow encrusting anemone. This wall sometimes forms curves to the left, although if we follow the stones with more or less continuity are parallel to it, in a course of about 60º, we will arrive at some cyclopedated stones that we can scrutinize and then take a 330º course to the wall , where after being forced to draw one of these huge rocks and ascend briefly to only -3mts, we fall again to -10mts and access the cave of the Elephant, which is introduced into the interior of the mountain and allows us to reach the surface where There is an air bubble. Finally we descend and go out to the open sea and return to the starting point, leaving the wall on our right now.

Small island located in front of the high cliffs of the Serra Gelada. Its main feature is the amount of octopus that can be found during a single dive, so it is also known as the “Island of the Octopi”. 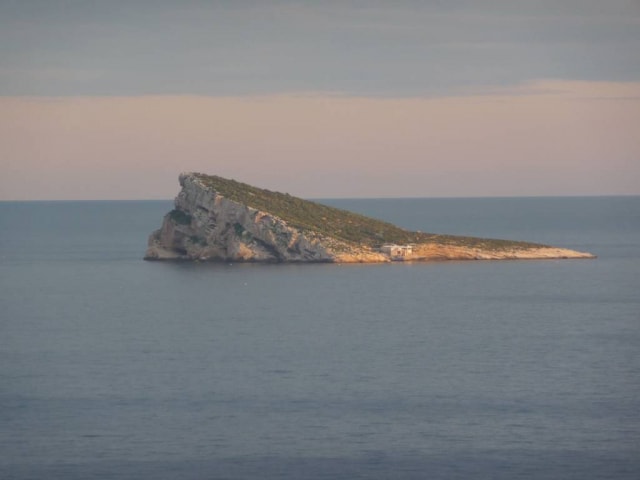 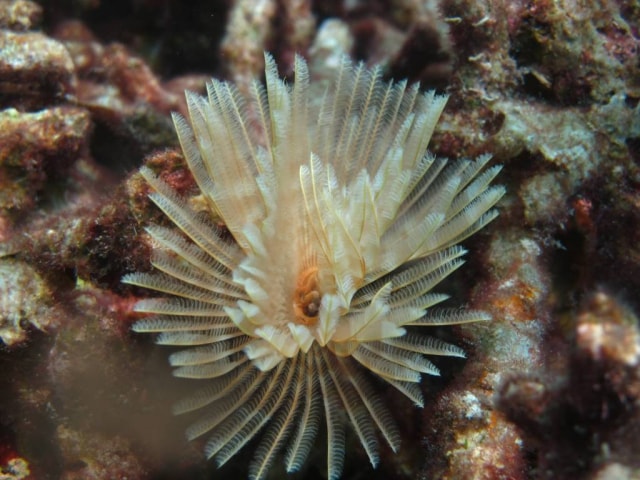 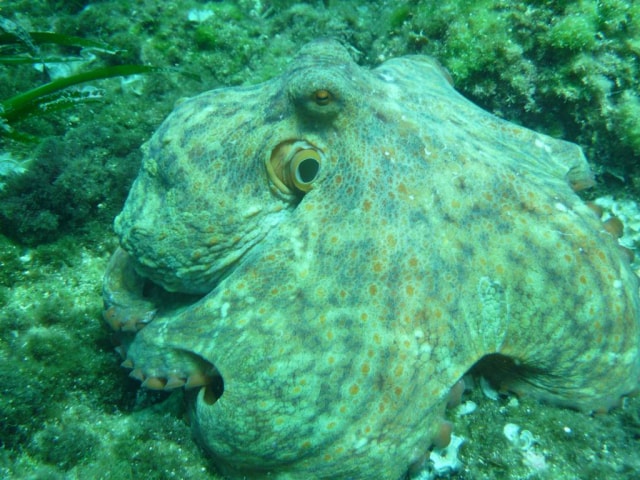 IF YOU ARE LOOKING FOR FREE PARKING

It is not an easy task, but once you download the material you can search the Avenida de Xixo, where there is usually a gap. (Ojo, in Google Maps it is located like Avenida de Cuba, although on the map it is Xixo). IF YOU DO NOT FIND A SITE, IT DOES NOT MATTER, YOU CAN GO TO THE MARKET PARKING AND PARK YOUR CAR, THAT WE WILL GIVE YOU TO GIVE TWO PARKING HOURS AT NO COST.

IF YOU ARE LOOKING FOR PARKING

There are two paid parkings nearby. One option is the Bingo Parking and another the Municipal Market Parking. If you park in the second (Market Parking), when you pay for your dive or your baptism, we will give you a

1.- BINGO PARKING (It does not have the promotion of 2 Free hours of Parking).